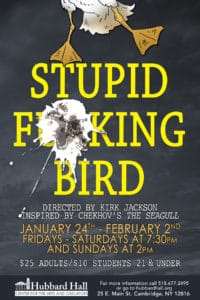 Directed by Kirk Jackson
Inspired by Chekhov’s The Seagull

From the director who brought you A Walk in the Woods and The Book Club Play, Stupid F*%king Bird is a hilarious explosion and adaptation of Chekhov’s The Seagull.  “…an accessible and unfailingly delightful jaunt into misery (or maybe we should say compromised happiness). It’s absorbing in its every glance and revealing in its every sigh.” —Washington City Paper.  Appropriate for ages 15 and up due to adult language and content. Starring Jesse Pennington (Astrov in Uncle Vanya Off-Broadway with Jay O. Sanders in 2018) and Danielle Skraastad (fresh from a hit run in Hurricane Diane at New York Theater Workshop Off-Broadway) and David Snider (A Walk in the Woods, The Glass Menagerie and The Crucible at Hubbard Hall
$25 Adults/$10 Students 21 and Under